Words and Photos by Afro-Jim Choquette. His whole crew finally arrived by 1:30am and the spirits began to flow. “I’m gonna' go do that big wave ramp," proclaimed Grier (fully kitted-out with some Timb’s, designer jeans, button-up shirt, and matching beanie). Grier is the comedian who opens for Chappelle, and I must give him some props for his insight into the female anatomy. Another one of Dave’s crew, Country (Chappelle’s Security Detail), was trying to go down the flat banks. Again, Timb’s were the skate kicks of choice. If you’ve ever been to the park for lessons, then you may have seen a timid, fully-padded child inching his way closer and closer to the flat-bank until the front wheels get over and – BAM! Hang-ups are a bitch… just check the pics. Country was a good sport though and continued trying it until he was getting it regularly. He hit another wall in developing his run, when he was trying kick-turns on the top of the pyramid to loop out. Way to stick with it… Big ups to Smerv. He ripped the main course, kiddie course, and all areas between. A large portion of my time that evening was spent conversing with Chappelle about everything from his show, to life on the road. Being an aspiring stand-up comedian, it was an excellent chance to listen and learn from someone who has been in the game since age 14. While I have had the opportunity to meet and talk with a lot of larger-than-life people, the time spent with Dave proved to be a unique experience that will not be outdone any time soon. After all…HE’S RICK JAMES, BITCH! Dave was performing in Tampa on Thursday, Friday and Saturday nights. When Dave’s only white dude in transit, Mustafa, called the park to set-up the private session, Barak was able to set something up for a few tickets. I was planning on trying to get in at the same time using my golden ticket – Dave Chappelle’s hat that he left at the park. I also figured I’d be able to get my roommate, Texas, in at the same time. After talking to everyone from the doorman, to security, to the ticket lady, I was finally able to get myself in for free and Texas had to pay. We walked in just as Chappelle started and sat down for the most amazing comedy show of my life. He wants us all to know, that he prefers consuming illegal narcotics with Caucasians over African-Americans. After that comment, I screamed down to him on stage, “I’M WHITE, BITCH!”. To Mustafa, Grier, Country, Smerv, and Chappelle - you guys always have a place here in Tampa because you know about and respect skateboarding. To Chapelle - you'd better go down the Kahuna next time - we got pads. Jim 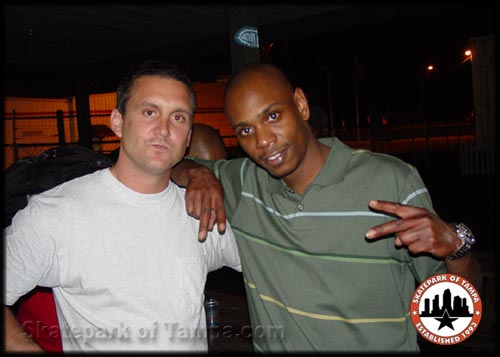 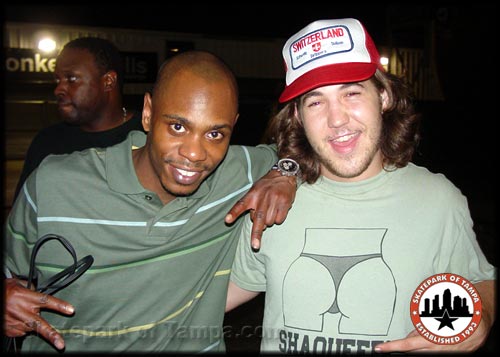 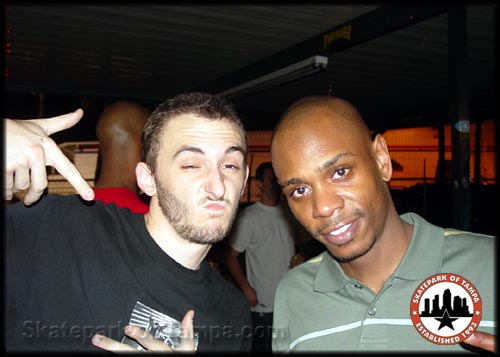 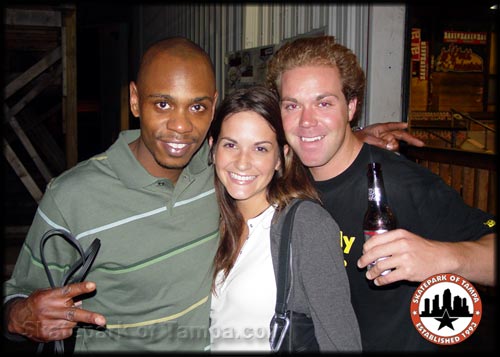 Dave Chappelle with SPoT employee Jason and his girlfriend. If you think she looks familiar, click here 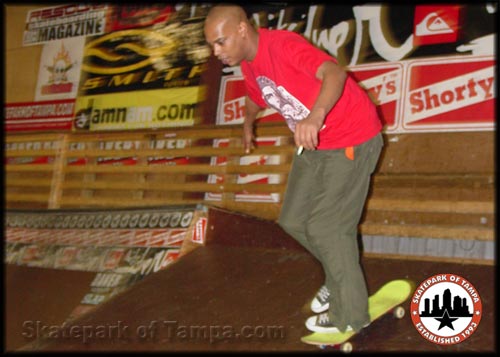 Smerv: I'm about to slam, bitch! 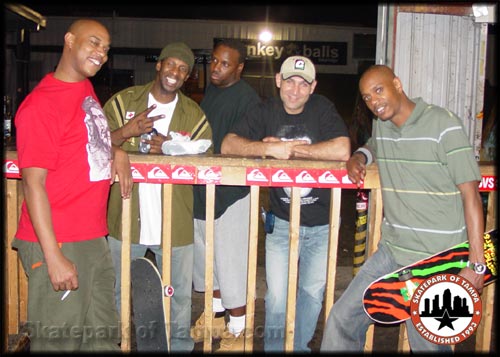