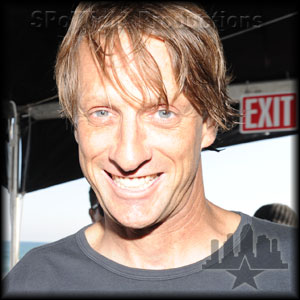 From last month, Tony's words about the Olympics. Apparently, the IOC has recently rejected the wood and wheels for 2016 or whenever that next geezer gathering of shot putting and curling is:

Wow, Tony destroys it not just in the air but on the much harder lip tricks. Check his new part with a bonus from Riley, Jaws, and Ben:

In the early 90's, Tony Hawk found one of the only vert sessions in existence happening in Tampa. He gives praise and talks of skating Tampa with former Birdhouse teammates, Paul Zitzer and local powerhouse Mike Frazier. Tampa was fortunate to make history as Tony set his sites on Tampa as the place to ride away from the first ever kickflip 540. Tony notes the importance of the contests and to "...witnessing some of the heaviest street events..." and gives respect to Eric Koston, Tom Penny, and Kareem Campbell. Not wanting to miss Tampa Pro 1998, he took a red-eye flight showing up to practice before the park even opened. Later that day he won Tampa Pro and was immediately back on a plane to skate X Games that same day. Sit back and enjoy another experience from one of the greatest contributors to skateboarding of all time.

Tony was recently in Greece tearing it up in someone's skateable living room:

Tony shuts it down at this vert demo with Jaws, Cab, and crew:
View all Tony Hawk news.